TMS?” The meeting was very well attended and very thought provoking. Initially, Dr. Pitch reminded us that Treatment Resistant Depression is a chronic, relapsing disorder and the expectation is that relapse will occur without some form of maintenance treatment. Insurance coverage often is an obstacle to maintenance TMS treatment. Dr. Pitch reviewed several studies and their protocols, as well as the “watch and wait” recommendation by Phillip1 2015 and the gradual taper recommended by both Connolly2 2012 and Richeri3 2013. Senova et al.4 2018 meta-analysis of 18 studies published between 2002 and 2018 was reviewed revealing rTMS maintenance may enhance the durability of rTMS. That article stated, “rTMS maintenance treatment when applied to those responding to acute rTMS treatment, was associated with higher sustained responder rates after 3 months, and especially after 6 months, which were respectively 35.8% and 58.7% greater than those reported in the absence of rTMS maintenance”.

Dr. O’Reardon then described his own treatment protocol of once per week for one month, every 2 weeks for 2 months, once per month for 3 months, and then you customize treatment based on the patient response, prior history of relapse, degree of depression, etc. He does not feel every patient needs maintenance treatment, but offers it more often than not. He has even had one patient on maintenance treatment for almost 10 years.

Dr. Bermudes also discussed the limitations of insurance coverage and the fact that they may not allow maintenance treatment. He reported the patient may need “clustered courses” within a year and that possibly durability extends after 2 - 3 courses. Dr. O’Reardon agreed that the patient may have increased resilience after multiple treatment episodes. He also pointed out that “Once they improve they must capitalize on it and increase activities and socialization, and develop better problem solving techniques so that they do not fall into depression again.” Dr. Pitch summarized that in these treatment resistant patients response to rTMS varies with about 50% getting better and 40% getting all the way better and stated “even if the number of responders may be lower… to those… you have impacted their life in a very meaningful way”.

One obstacle to ensuring standard maintenance TMS insurance coverage may be the various names to which we have referred to treatment with TMS past the acute treatment phase and the various protocols prescribed. These labels have ranged from extended taper, rescue, booster sessions, re-introduction, refresher, Re-Treatment, continuous TMS, clustered maintenance, planned maintenance, clustered courses, to Early Relapse Prevention and more. There is also often confusion as to whether one is referring to a taper protocol versus an actual maintenance schedule. Sackeim’s5 2016 report attempted to define treatment as acute, continuation, and maintenance. He suggested that continuation treatment may be a better description than maintenance. Acute treatment was defined as the interval of time to respond initially, continuous treatment was from 6 months up to one year after initial response, and maintenance would be the time after the continuous phase.

I have reviewed numerous studies and case reports from 2002 to 2019 with various taper and maintenance treatment protocols described. A summary of those are as follows:

Banadhira et al. 9 2005 reported using 3 weekly sessions for 2 weeks, then once per week for one month and then each fortnight.

Richierieri et al.23 2013 – 3 weeks taper of 3/week for the first week and twice per week for weeks 2 and 3. Then used maintenance of one/week for 2 weeks, every two weeks for 2 months, and then one session per month for two months

Burton et al. 26 2014 had a patient on maintenance of every two weeks when the patient became pregnant

Haesebaert et al.35 2018 – 3 arm study. For maintenance TMS used 2/week for one month, once per week for 2 months and then every 2 weeks for the next 9 months

With all of this in mind, I decided to do a survey of our Clinical TMS Society members to see what patterns may emerge. We received 130 surveys. When asking “Approximately what percentage of your patients relapse after successful TMS in a one year period?” 128 providers responded with 35.94% endorsing 16-30% relapse, 25.78% reported 0 – 15% relapse, and 22.66% reported 31-45% relapse. When asking “Do you automatically do a taper schedule after response in your TMS patients?” 128 of the 130 providers responded, with 56.25% reporting yes. The most common response to “If you use a taper schedule, what is your typical length of taper?” was “Other” by 42.06%. 126 of 130 providers responded to this question with another 28.57% endorsing 2 weeks and 21.43% endorsing one month. The question “With respect to your taper schedule, at what frequency do you administer the TMS?” was responded to by 127 of the 130 providers. Once again the majority checked “Other” at a rate of 38.58%. Additionally, 25.20% reported several days per week, and 23.62% endorsed twice weekly. 46.15% of responders report using booster sessions to the question “For patients that relapse after successful TMS, which of the following best describes your clinical practice?”. All 130 providers responded to this question. Another 25.38% endorsed “Wait and watch—reintroduce if necessary”. And lastly, to the question “If you do reintroduce TMS to previously successful TMS patients that have relapsed, what is the treatment schedule you prescribe?” all 130 providers responded with the most common answer being the same schedule as previously successful marked by 38.46%. Another 24.62% responded that they use the full TMS schedule that was previously successful with planned TMS maintenance, and 23.85% marked “Other”. Additional comments when providers marked “Other” are listed below the corresponding graphs below.

In summary, continued Transcranial Magnetic Stimulation treatment after acute treatment appears to be a valuable option for our patients and used in a variety of ways by many providers both in the literature and in our society and in disorders beyond just depression. More consistent nomenclature and protocols may possibly aide in our future battles for insurance coverage of extended TMS treatments. 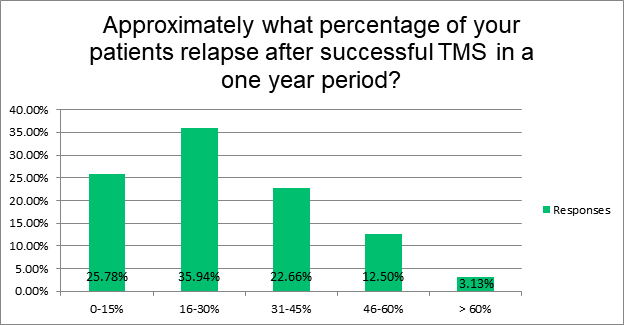 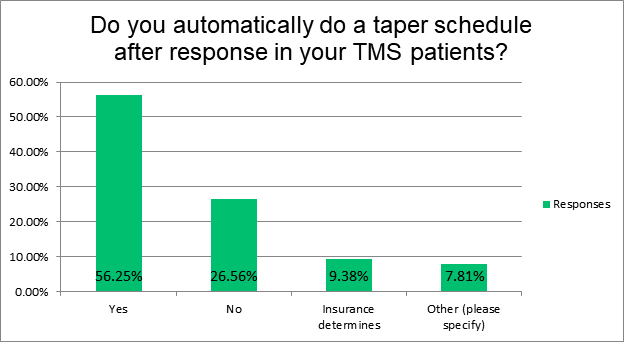 **A taper is preferred, but if the patient was a late responder or their schedule is prohibitive we don’t.

**Varies. By default we plan for: 2x/week for 3 weeks (sessions 31-36) but sometimes this is modified for both clinical and insurance issues.

** We use all 36 sessions back to back if dealing with insurance.

**Continue daily until 30 treatments, and then taper. Taper is not response driven. It is treatment number driven. Sometimes I won’t taper if I want more response or if the patient desires no taper.

**I do the standard full 36 sessions, which includes the 3 week taper, regardless of when a patient reaches response.

**Yes, unless insurance refuses and patient can’t afford even a very reduced fee.

**If patient is agreeable.

**33 providers reported that they usually taper over 3 weeks—either 3-2-1 pattern or twice per week usually for sessions 31-36.

**8 provers commented that they usually do not taper.

** 1/week for 4 treatments, then q 2 weeks and extend as tolerated after 3 treatments.

**We complete as many in a row as possible. No taper.

**If second TMS, will try to taper over two months.

**2 – 4 weeks, as allowed by insurance authorization.

**6 txs over 3 weeks; maintenance every 2-3-4 weeks depending on clinical symptoms.

**Typically 2-3 weeks for the last 6 treatments, but if the patient is extremely treatment resistant, we may start tapering after the 20 – 25th treatment (cut back to 3 days per week) to extend the taper out. 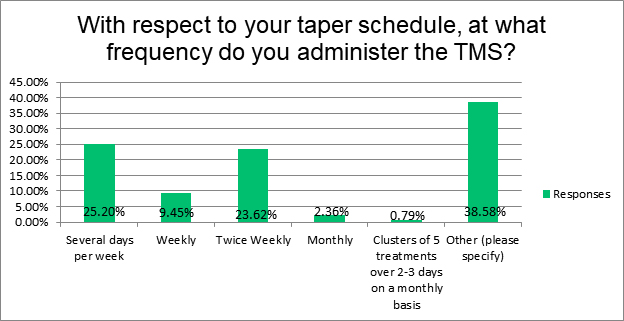 **Either weekly or cluster depending on patients’ needs and proximity to treatment centre. 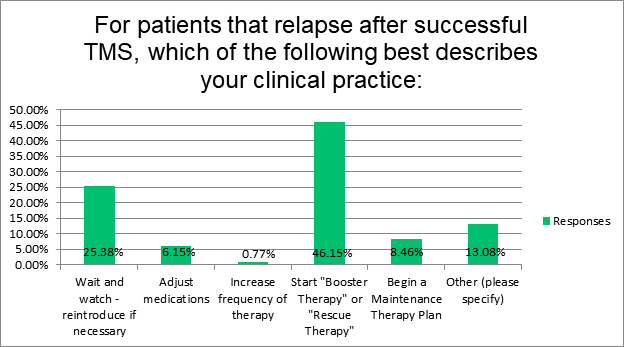 **Strategy is determined by insurance blackout period for retreatment.

**Not all patients are a part of med management practice. We evaluate & then proceed.

**We offer all these options. Insurance seems to control what we do and this most often is an (un)necessary second full series when a rescue series of 5-10 sessions would do it.

**Whatever the insurance company allows.

**Depends on the situation.

**We have 90 day and 180 mental health surveys as part of national VA clinical study. This allows for check in and reassessment of durability of treatment.

**Provide another full course of rTMS.

**Referrals of treatment resistant or hard to treat patients.

**As we all know, most carriers won’t cover maintenance and most pts won’t pay even significantly reduced fee. We educate pts to understand the requests by most carriers to authorize a 2nd course and provide full assistance. We mail out follow-up measures monthly.

**Depends on the patient and often what insurance will authorize. 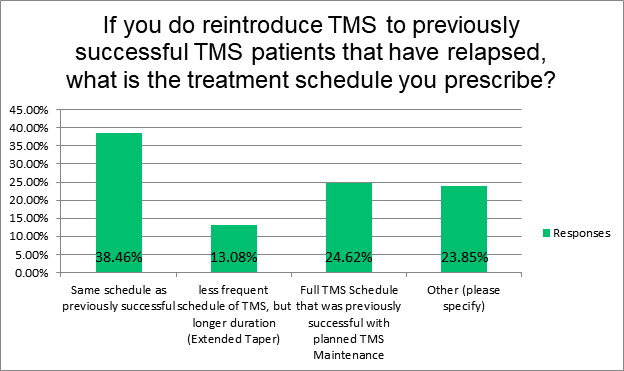 **Depends on how soon upon relapse we see them. Immediately at the start = 5 x per week and re-evaluation. Total relapse = new course.

**Depends upon outcome, ranges from 1-30 treatments.

**Depends on case, finances, and insurance.

**Again reason is what insurance will permit. I would prefer to do regular maintenance.

**It is not possible to get approval for reintroducing treatment within a year.

**If less than a year from the initial tx will provide 4 tx’s the first week, then 3tx’s the second week and 1 or 2 the third week if necessary. If relapse occurs at over a year out from the initial tx course, we typically plan on another full round of 20 – 36 treatments.

**Treat until responding, and then lengthen the interval.

**Individualize, may offer multisession taper up to targeted therapeutic response and then initiate taper/maintenance over 3 – 6 months.

**Varies with clinical situation. Some have waited “too long” and we plan for a full TMS retreatment. Other are in earlier and can get away with 6 – 10 sessions, but insurance does not understand “booster” only retreatment.

**Start with full previous successful schedule, but may decrease depending on response with goal to develop a maintenance schedule that is individualized to the patient.

**Treat until response again whether it’s 10 or 30 treatments, and then use the remaining treatments as “continuance” until we run out of insurance authorized treatments or the Auth expires.

**A course of accelerated TMS (2 sessions per day for 4 days).

**Start with 10 sessions, 5 per week and beyond that as many as it takes to re-achieve remission then, planned maintenance.

**15 treatments, full schedule only if necessary.

**All of the above are viable options.

**Reintroduce 3/2/1, increase frequency or number depending on response.